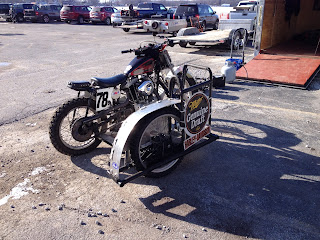 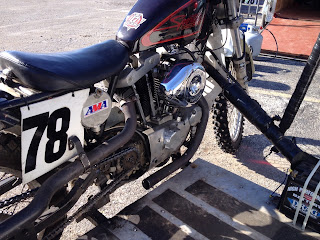 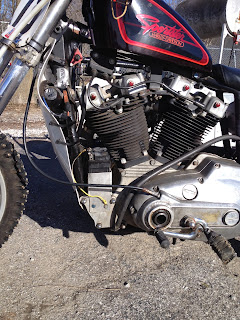 Went to see ice racing on Cedar Lake last weekend. Not much too report except I got out of the house and saw motorcycles. Most of the classes ran no screws so not very exciting for spectating. The sidecars could only run screws on the front. And there were only three. The main class with ice screws were cool to watch but we couldn't get very close. This iron head was pretty cool. The old man had a chance to chat with him but as usual I showed up late. When I took these pics he wasn't around. Cool scoot none the less.
Posted by Surly at 12:18 PM No comments:

Here's a thing I built 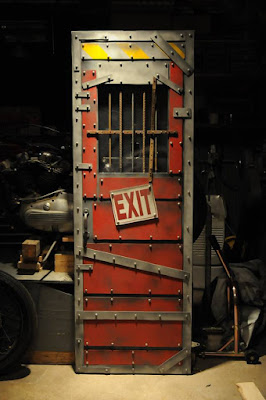 Don't watch if you get seasick

Indiana in the summertime 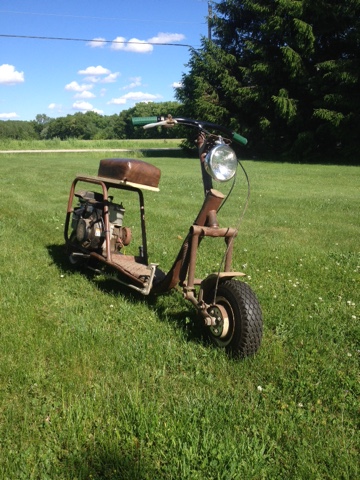 Got the little scooter running while listening to the 100th running of the Indy 500. Everyone has their ritual but I like to listen to the race on the radio while wrenching on a bike in the garage. Congrats to Mr. Rossi on the win. I think the green grips on the black bars look pretty nice and the throttle is nice and smooth. The scoot doesn't run all that well, it shakes pretty bad, and the steering is sketchy. Like, real sketchy. So much so there's no way I'm putting the kids on there until I get it sorted. I took a hilarious on bike video but can't upload on my phone. It looks like you're on hallucinogens and you can hear the suspension hammering on the bumps. I'll try to post it later..
EDIT the video is too big to upload. I'll have to do it again but only one lap around the house. 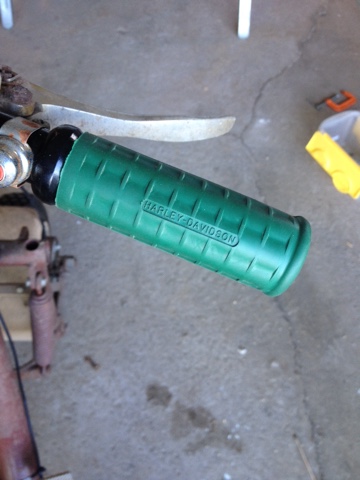 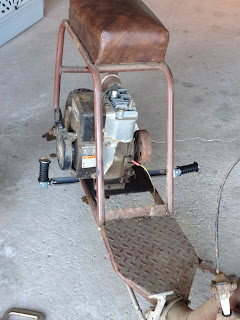 I got the pegs welded on the scooter and put the freshly rebuilt and cleaned fuel tank and carb back on. The carb still isn't working. If I pour gas in the carb, it will start so either I didn't get it clean enough or there's a problem with the pump. I'll have to pretty much repeat that entire process. I scored some carpet foam and reinforced the seat a bit. I'll need to either build another additional seat or make one long one to be able to afford a passenger. I've got plenty of padding for that either way.
I got real busy with other stuff and the wife hurt her leg and is on crutches. That means fun projects are on hold for a while. Kid's birthday and a wedding coming in the next few days so she's gonna have to just sit for now. The scooter and the wife. Oh, I did get the handlebars sandblasted on Mother's Day. It's not far away from running but I can't seem to get my free minutes all bunched up together.
Posted by Surly at 9:47 AM No comments:

I took the carb off the scooter. Ugliness. 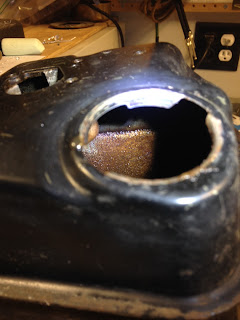 Tank is rusted, full of varnish. The carb is attached to the tank and it was not real obvious how removal was supposed to happen. I decided to do an internet search and came across this...

Not only does it pretty much answer all my questions. It's pretty funny. At least the beginning is. Thanks Taryl. It's interesting to me that not only did I find what I needed pretty quick on the ol' interwebs, this guy's shop is local. My dad had one of his kids as a student.
Anyhow, I need to move the seat a bit as well. It's almost too far back for me to use and there's not enough room on the seat for a passenger. 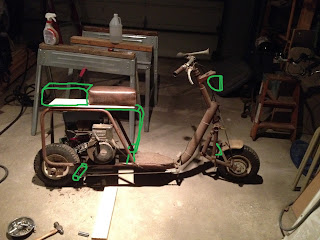 I've got a spare headlight I might toss on there but I don't have a way to power it. I've got a half-assed plan for that but I just need to make it run and put the seat in a better location. Since the bars are from a Topper I have 1 1/8" dia. controls on both sides. I found some original style grips on eBay and I've got some passenger pegs coming as well. The weather's nice this week so hopefully I can get something done this weekend. I might repaint the whole thing at some point. Not a fan of brown but I can't be tearing this down to the hubs right now. Too much to do. I'm using the Cushman Trailster as a jumping off point as far as the overall look. Well, a cross between that and a Highlander.
The yellow bike is the Trailster. The red ones in the back are Highlanders. No fairing yet.

From Rocker to Mod? 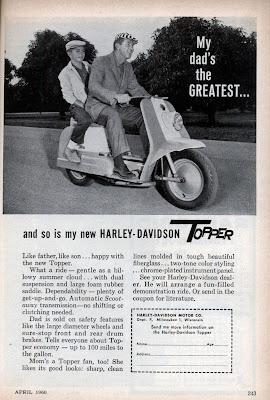 I'm not sure if it was the best decision I've ever made but I brought home a scooter. It was a Harley-Davidson Topper in a former life. Someone drug it out of the woods and my dad and his student's turned it back into a functioning scooter. He said it was an entry into a welding contest. It leans more toward a farm store mini-bike than a Lambretta but you should have seen it fresh from the woods. Rough. I've ridden this little beast but it's been a few years. Odd handling if I remember correctly. I mentioned to Dad that I should get it out and give the kids a ride. He said he'd be happy to deliver it to my house. Which means - "Get that thing the hell out of here or it'll just turn back into a pile of rusty junk". I gave the rope a tug on Sunday but all I got was a sore arm. The gas is probably five years old and Sta-bil isn't magic so it'll need a carb clean, oil change, and a bath. It's covered in bird shit so it really needs a bath, the front tire is off the rim, and the seat is a bit short for riding two-up. I just drug it home because I thought the kids would dig it so I'll need to stretch the seat a bit. If I'm not mistaken it's made from an old tarp. I'm thinking that was the impetus for the color scheme. 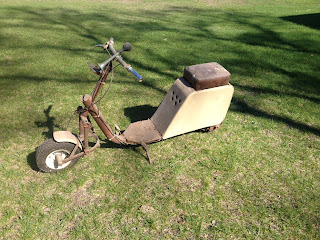 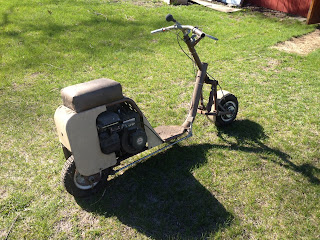 If I had time to burn I'd probably put some bigger wheels and tires on it and maybe better brakes. Lights would be nice. Maybe a paint job and a fairing of some sort.  What's really going to happen is I'll put some grips on it and make the seat longer. Or shoehorn a CB500 seat on there or something. 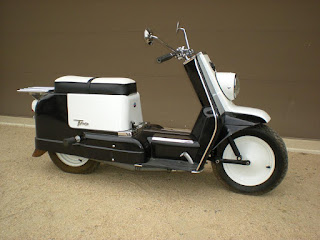 This is what a restored Topper would look like. Pretty classy looking scooter in my opinion. I don't have the time to work on it. I don't really have the space to store it. I don't live on a farm and I cannot ride it on the street. Yeah, makes perfect sense. I won't be ditching my Gene Vincent records or leather jacket but I do like me some Specials and I did see The Who on their Quadrophenia tour back some years ago. I really don't think any self-respecting Mod would be seen on this little gem. At least in it's current state. It does have a certain quality, however. I find it fun to pick on but it's a cool little scooter. BELLBOYYYYYYY!!!!!!

From bad to worse 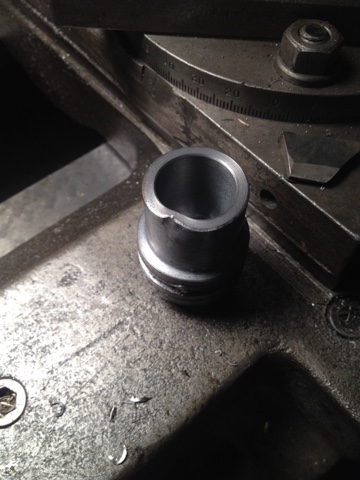